Aberdeen is Scotland's third most populous city, one of Scotland's 32 local government council areas and the United Kingdom's 37th most populous built-up area, with an official population estimate of 196,670 for the city of Aberdeen[1] and 229,800 for the local authority area. Nicknames include the Granite City, the Grey City and the Silver City with the Golden Sands. During the mid-18th to mid-20th centuries, Aberdeen's buildings incorporated locally quarried grey granite, which can sparkle like silver because of its high mica content. Since the discovery of North Sea oil in the 1970s, Aberdeen has been known as the off-shore oil capital of Europe. The area around Aberdeen has been settled since at least 8,000 years ago, when prehistoric villages lay around the mouths of the rivers Dee and Don. 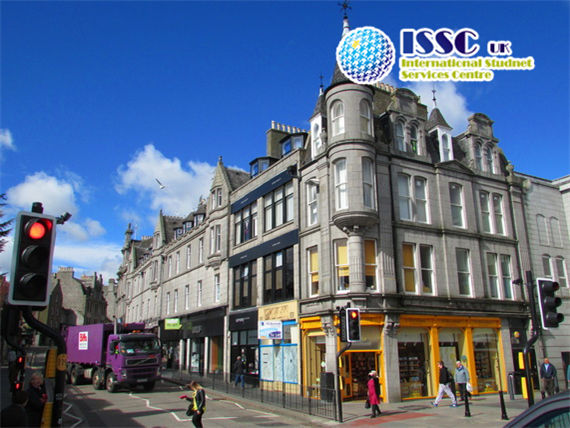 Robert Gordon University, commonly called RGU, is a public university in the city of Aberdeen, Scotland. It became a university in 1992, and originated from an educational institution founded in the 18th century by Robert Gordon, a prosperous Aberdeen merchant, and various institutions which provided adult education and technical education in the 19th and early 20th centuries. The university awards degrees in a wide range of disciplines from BA/BSc to PhD, primarily in professional, technical and artistic disciplines and those most applicable to business and industry. RGU is a campus university and its single campus in Aberdeen is at Garthdee, in the south-west suburbs of the city amid parkland on the banks of the River Dee. The university also operates an Administration Building in Aberdeen city centre, at Schoolhill.